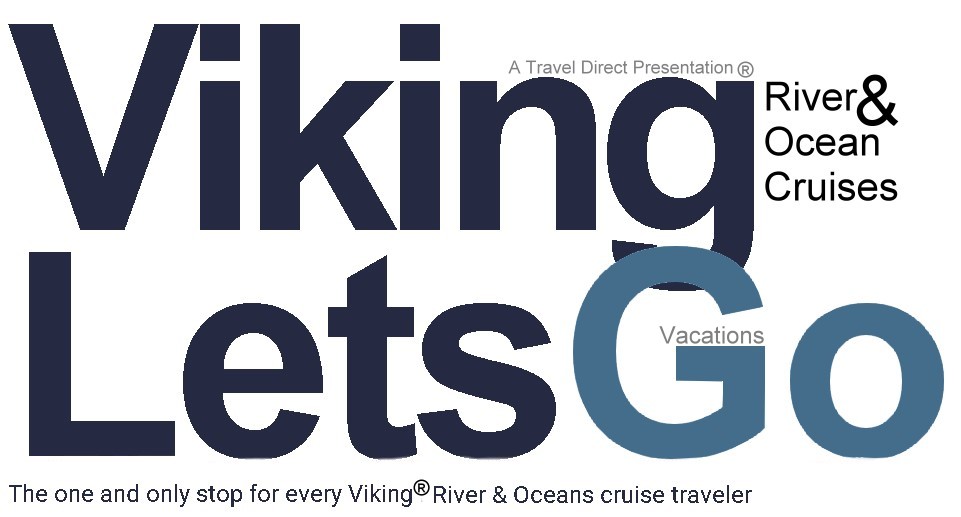 WHAT'S NEW WITH VIKING?
→There's always something new on the horizon with Viking, from new trips, to exciting upgrades and special offers, to new shore excursions and more.

→ Look inside and see what's new, and for more things to see and do!

You've clicked your way around the internet, landed here and now you've found some of our most unique voyages. Good choice, these are no ordinary cruises!

Immerse yourself in the Old World as you sail Europe's most iconic rivers. Discover Danube gems like Vienna and Budapest. See storied Rhine castles.  Trace French history along the Seine. From the Main to the Moselle, the Douro to the Dordogne, the Viking experience is unsurpassed.

Find out where, when and how.

Choose a cruise below to learn more.

Help From Our Experts

Help Is Just An Ask Away

We know you may have questions or need help with planning your vacation. That's why we make it easier to get what you need online or over the phone, help from certified travel experts when you need it, and more importantly, that "Been There...Done That" experience and expertise you expect, because we want you to have the best vacation experience possible.

Find what you are looking for in the>  Viking Rivers & Oceans Departures by region.

Early Booking Advantage
Great rates for those that book early. Thinking about a 2022 -2023 river or ocean cruise? Take advantage of reduces cruise fares, reduced or free airfare, even special amenities packages! > Check it out.

Check out these Destinations for Expedition Cruises: Antarctica, The Arctic, The Great Lakes, Niagara, Canada, The Galapagos, Brazil, and the Caribbean.

Let's Go Vacations, is our "A" list of Viking voyages with unique travel experiences and unforgettable moments that become lifelong memories. The list features unique highlights in every port of call. These hand-crafted itineraries take you to the world's most iconic and popular ports visited by travelers. We are excited to offer these enticing Let's Go Vacations so you can experience the best in cruising with Viking River and Ocean Cruises. → Be sure to check out the list of sailings by river or sea, or a combination of both!

The one and only stop for

Your go-to source for the latest on Viking Cruises®

We're your "go to" source of information to get answers to all your questions about Viking Rivers and Ocean Cruises. Please save this page - it's automatically updated as more information such as added sailings, cruise news, reviews, new promotions and special offers are announced. You'll also be able to find information here on what each Viking Rivers and Ocean Cruise cost, sailing destinations, departure dates, ships, cabin availability, health & safety protocols, cruise tips, discounts, deals and more. You can even get a free no - obligation price quote custom-made to reflect your travel plans and budget. After spending time on our website, you probably have a few questions.  Call us at 800.365.1445, get free planning help and all the answers to your questions from Certified Viking Master Cruise Advisors.

We are part of an exclusive group of travel planners who are recognized by Viking Cruises as Certified Viking Master River & Ocean Cruise Experts, earning that distinction for our unique qualifications and knowledge as planning professionals. No one knows Viking River & Ocean Cruising like we do. From planning to packing, discount rates to departure dates, where and what to see, everything you need to know about Viking's River & Ocean Cruises. Call us at 800.365.1445 for free help and planning advice. We are eager to share our own "been there, done that" River & Ocean Cruise travel experiences that we hope will inspire that curiosity within you for discovery and a passion for the wonders of the Caribbean, Europe, Russia and China. And now Antarctica, the mighty Mississippi River, New England & Great Lakes, Canada and beyond!.

→ Find All River and Ocean Itineraries & Destinations
→ Learn About All The Ocean & River Ships
→ What Is A River Cruise?

What Does it Mean to be the World's Best?

In 2022, Viking was named both the #1 Ocean Line and the #1 River Line in the 2022 Travel + Leisure World's Best Awards, reinforcing Viking's position as a formidable industry leader. Viking was also recognized as the #1 Ocean Cruise Line from 2016 to 2020, overtaking the spot previously held by a luxury cruise line for 20 years. In 2021 Viking was named both the #1 Ocean Cruise Line and the #1 River Cruise Line in Conde Nast Traveler's annual Readers' Choice Awards. This is the first time Viking has scored higher than all other cruise lines in both of these categories in the same year. Viking provides destination-focused itineraries for curious travelers. Each journey includes a shore excursion in every port and an onboard and onshore enrichment program that provides deep immersion in the destination through performances of music and art, cooking demonstrations, informative port talks and carefully selected guest lecturers. With 250 awards to its name, the company currently operates a fleet of state-of-the-art ships that have received numerous accolades since their launch from industry experts and travelers alike. Viking was voted the #1 River Line and the #1 Ocean Line by Travel + Leisure in the 2022 World's Best Awards. Viking is also rated #1 for both Rivers and Oceans by Conde Nast Traveler, becoming the first cruise line ever to simultaneously earn #1 in its categories from both publications.

Viking marks its 25th anniversary in 2022; by the end of the year, Viking will have welcomed two new identical expedition ships, as well as two new identical ocean ships, new Viking Longships in Europe and new purpose--built vessels for the Nile, Mekong and Mississippi rivers.

Ready to sail with the World's Best?

Water Levels on the Rivers of Europe
Your river cruise may be affected by low-water or high-water. In most cases, high water occurs in the spring while low water occurs in heat of the summer, usually August. The cruise is focused on monitoring and adapting to current water levels so that their guests experience the least possible disruption. While high or low water can impact your river cruise, the cruise lines have contingency plans that may have you change ships, or be bused to your next location or a combination of both.  Your river cruise may be altered or cancelled because the river cruise company could not operate in such conditions. You should check with the cruise lines official web page> Updates on Current Sailings about the current  conditions on the rivers and how the cruise company is handling adverse water levels.

With Viking, there are no hidden fees. No nickel and diming. One price covers most everything : port charges, Wi-Fi, meals, lectures, activities and shore excursions, plus hotel accommodations on cruisetours. 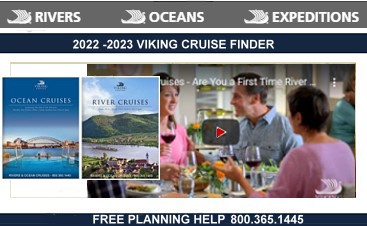 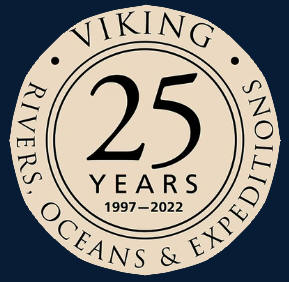 s, such as solar panels, an onboard organic herb garden and energy-efficient hybrid engines for a remarkably smooth ride. River cruises range from 8 to 23 days, with itineraries featuring Europe's Rhine, Main, Danube, Seine, Rhone, Douro, Moselle, Elbe, Dordogne, Garonne and Gironde Rivers; Russia's Volga, Neva and Svir; Ukraine's Dnieper; Egypt's Nile; and Southeast Asia's Mekong.
Mississippi River Ship and Itineraries
Viking will launch new destination-focused travel experiences on the Mississippi River in 2022, with its first 386-guests custom vessel, Viking Mississippi, with sailings ranging from 8 to 15 days. Viking's arrival will bring modern river cruising to the Mississippi and will represent a major commitment to tourism and economic development in many communities along the river. Currently scheduled ports of call on Viking's new Mississippi River Cruises comprise seven U.S. states: Louisiana (Baton Rouge, Darrow, New Orleans and St. Francisville); Mississippi (Natchez and Vicksburg); Tennessee (Memphis); Missouri (Hannibal, St. Louis); Iowa (Burlington, Dubuque and Quad Cities); Wisconsin (La Crosse); and Minnesota (Red Wing, St. Paul). The new state-of-the-art Viking Mississippi is inspired by Viking's award-winning river and ocean ships and will feature clean Scandinavian design, as well as public spaces that are familiar to guests but that have been reimagined for Mississippi River voyages. Purpose-built for the Mississippi and currently under construction in Louisiana, the five-deck ship's cutting-edge design, expansive windows and comfortable amenities will make it the largest and most modern cruise ship in the region.

Ocean Ships and Itineraries
In 2015, Viking introduced its first ocean ship with the naming of the 930-guest all-veranda Viking Star. One year later, Viking launched its second ocean ship, Viking Sea, which was joined by sister ship Viking Sky in 2017, Viking Orion in 2018 and Viking Jupiter in 2019. In May 2021, Viking welcomed its newest sister ship, Viking Venus, to the fleet. The company's award-winning ships are engineered at a size that allows direct access into most ports, so guests have easy and efficient embarkation and disembarkation. Each ship boasts a private veranda in every stateroom, a choice of restaurants offering a variety of fine dining options, the most al fresco dining at sea, an infinity pool, a Nordic-inspired spa, panoramic Explorers' Lounge and thoughtfully curated book collections throughout the ship, and more, all designed in understated elegance. Ocean itineraries are designed to maximize the amount of time travelers spend in their destination. These enriching itineraries include base and combination cruises sailing to Scandinavia and Northern Europe, the Mediterranean, the Caribbean, Australia and New Zealand, Asia, Alaska, North and South America, and Africa.

Expedition Ships and Itineraries
Viking will launch new expedition voyages in 2022, with its first two 378-guest sister ships, Viking Octantis and Viking Polaris, with voyages that range from 8 to 44 days. To develop the new expedition voyages, Viking has partnered with some of the world's most prestigious scientific institutions. The lead partner is the University of Cambridge's Scott Polar Research Institute. This relationship is underpinned by a major Viking endowment for scientific research into the polar regions, The Viking Chair of Polar Marine Geoscience, a Cambridge University full professorship based at the Scott Polar Research Institute, as well as a sponsorship fund supporting the Institute's graduate students. As part of this endowment, the Institute's scientists will undertake fieldwork onboard Viking expedition vessels and join voyages to share their expertise with guests. Viking has also partnered with The Cornell Lab of Ornithology, a globally recognized bird research facility, whose ornithologists will regularly be on board the expedition ships, providing guest advice and interaction. Designed by the same experienced nautical architects and engineers that designed Viking ocean ships, the ships are optimally sized and built for expeditions - small enough to navigate remote polar regions and the St. Lawrence River, while large enough to provide superior handling and stability in the roughest seas. The ships will feature public spaces that are familiar to Viking's ocean cruise guests but that have been reimagined for expeditions, as well as new public spaces created specifically for expeditions. Straight bows, longer hulls and state-of-the-art fin stabilizers will allow the ships to glide over the waves for the calmest possible journey; ice-strengthened Polar Class 6 hulls will provide the safest way to explore; and U-tank stabilizers will significantly decrease rolling by up to 50 percent when the ships are stationary.